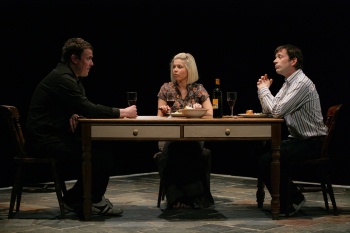 The Kiss premiered June 2006 at the Hampstead Theatre, London, in the Michael Frayn Studio, in a four-night showcase production directed by Dan Ayling, performed by Pandora Colin, Simon Scardifield and Simon Bowen. Subsequently it was staged at the Lakeside Arts Centre, Nottingham, in March 2007, directed by Matt Aston and performed by Emma Pike, Stephen Hudson and Steve Jackson.

This is a three-hander, jumping back and forth over five years, telling the story of Cait and Will, a married couple, who are plagued by an old friend of Will’s, Griff, who overreacts when he discovers that Will stole a recipe of his with which to seduce Cait.

The play’s dialogue fragments and whole scenes repeat, exploring how we repeat ourselves. And if we do that, how original is anything we do? And what is original anyway, and what can you own of your own if it’s all been stolen many times over?

This play started with the title, thinking about both Rodin’s and Klimt’s pieces called The Kiss, and I wrote a first scene which I liked, so self-plagiarising, I wrote it again. This dovetailed with ideas inspired by the work of Lawrence Lessig and other critics of intellectual property, and off I went…

“The Kiss is a paradoxical entity, as richly textured yet stripped-down as contemporaray theatre gets… The Kiss excels, offering the actors plenty of scope to create an emotional chaos that tugs against the script’s clinical precision.”Wayne Burrows, Metro